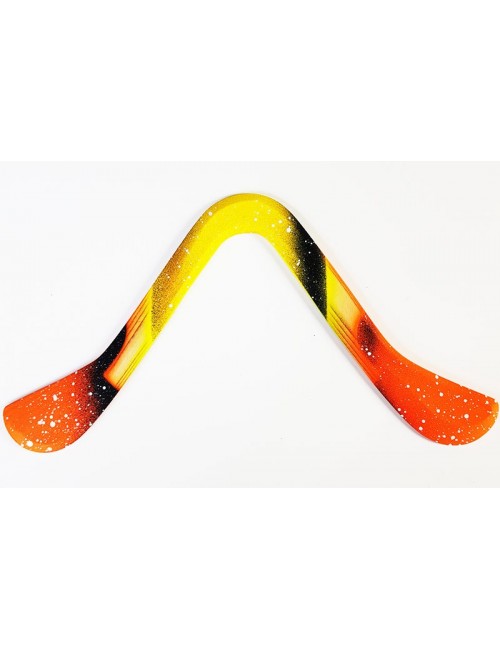 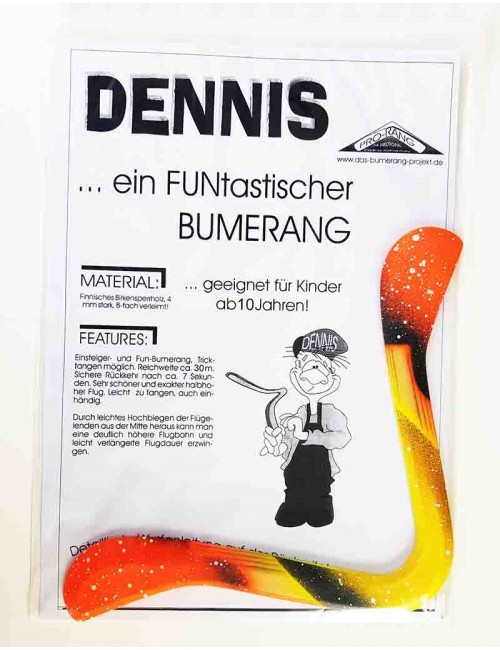 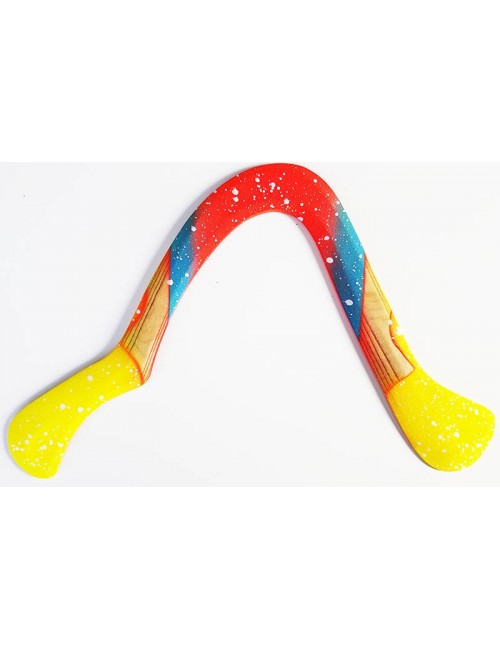 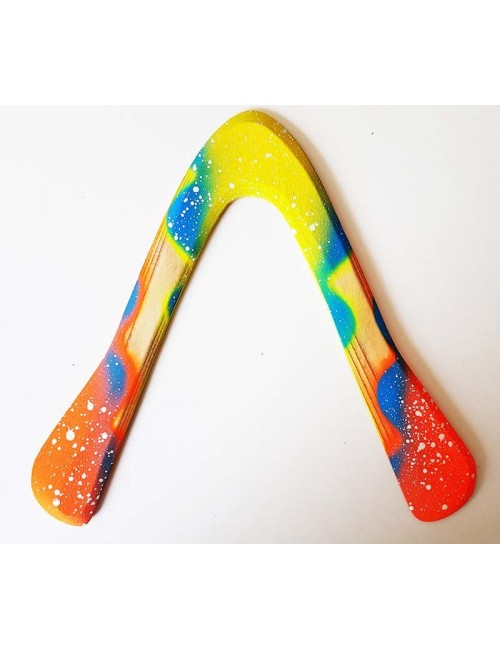 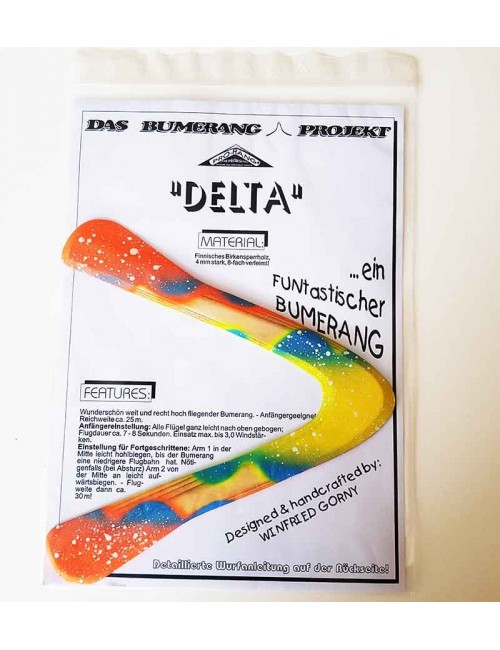 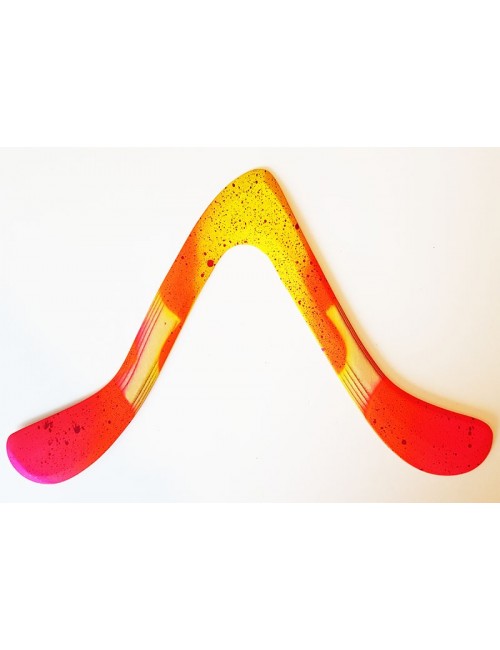 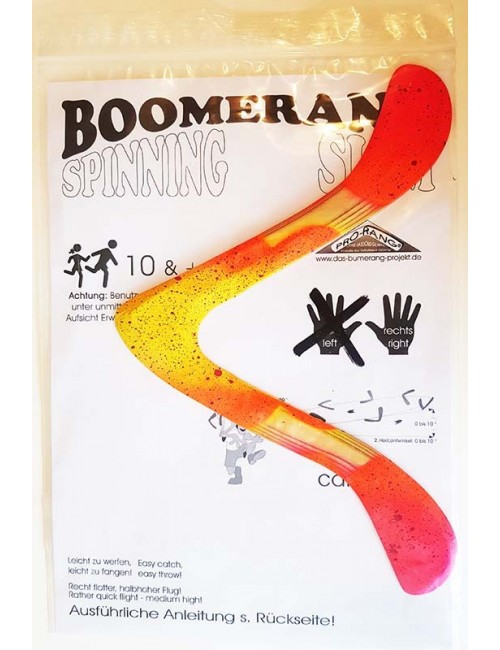 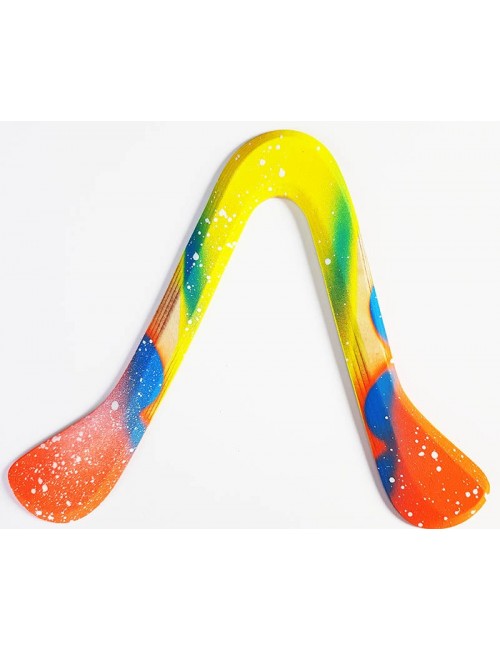 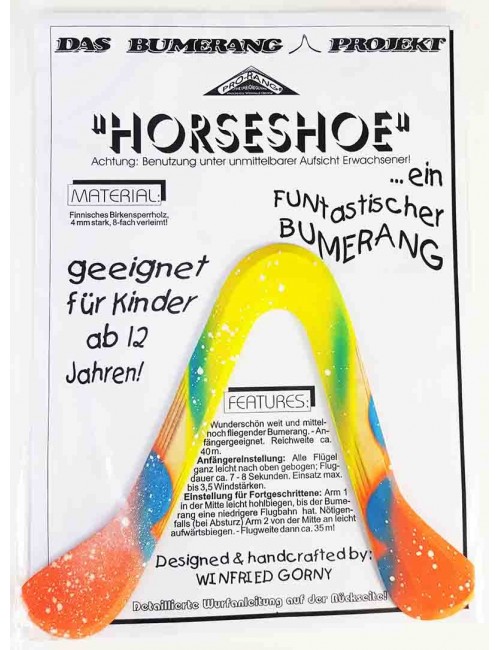 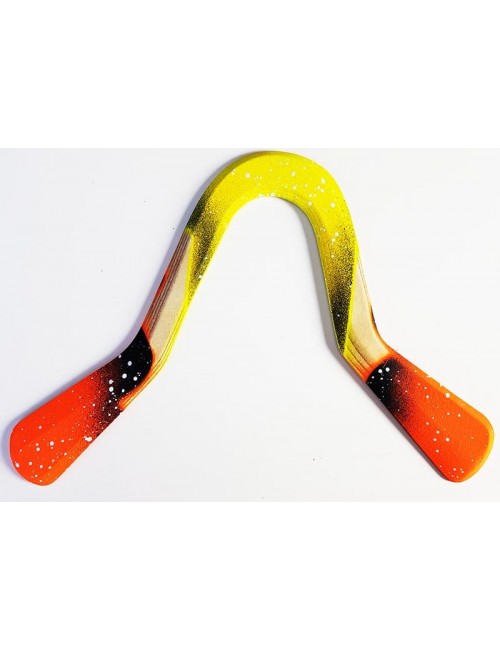 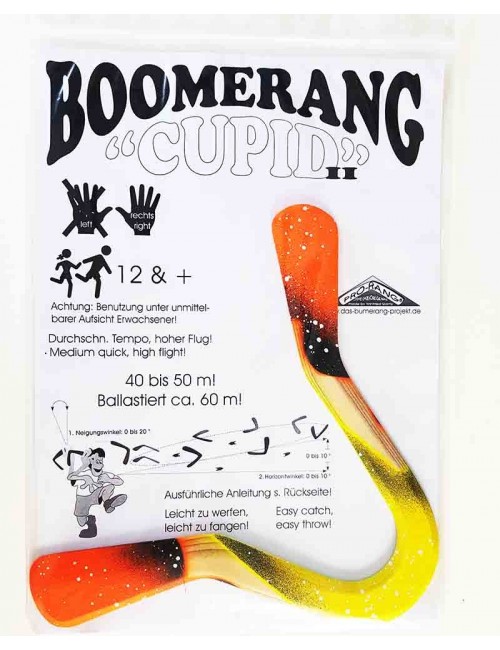 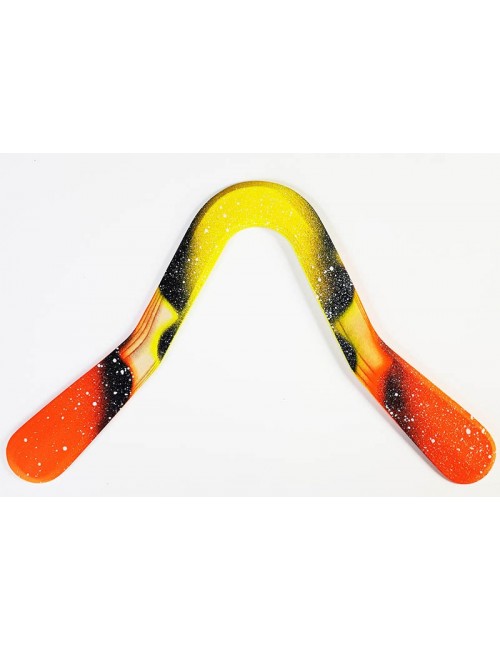 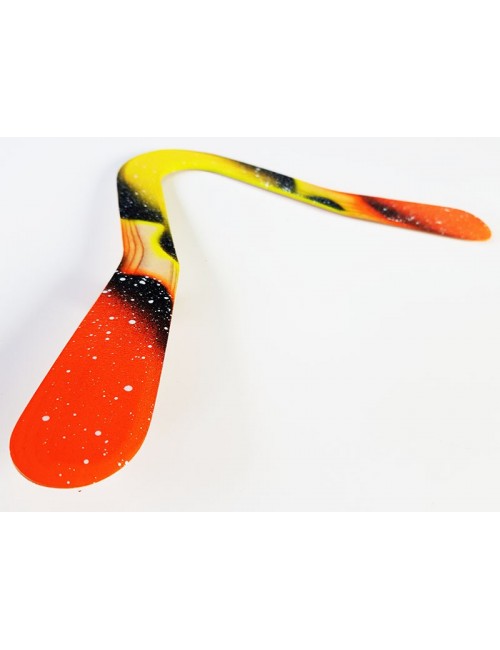 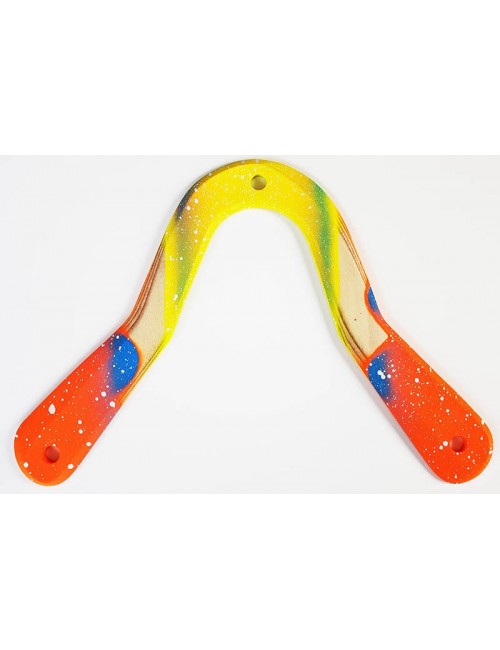 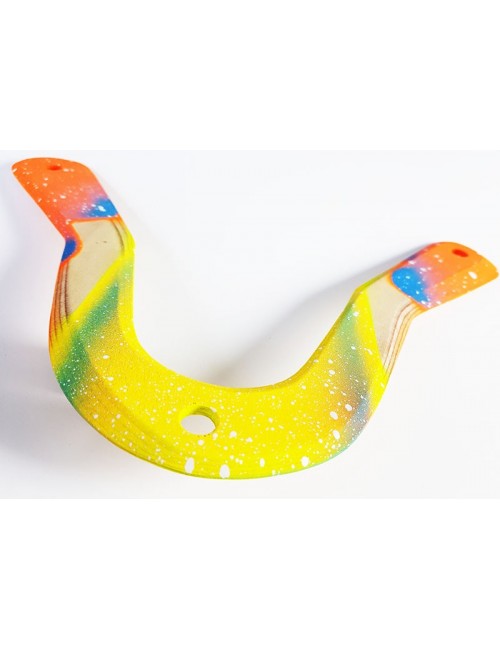 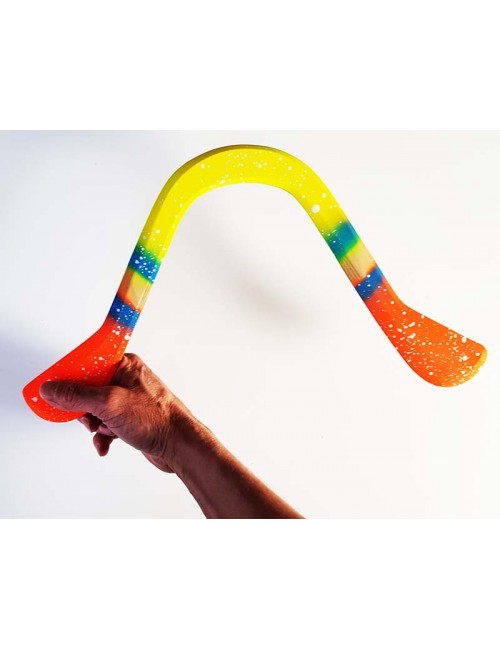 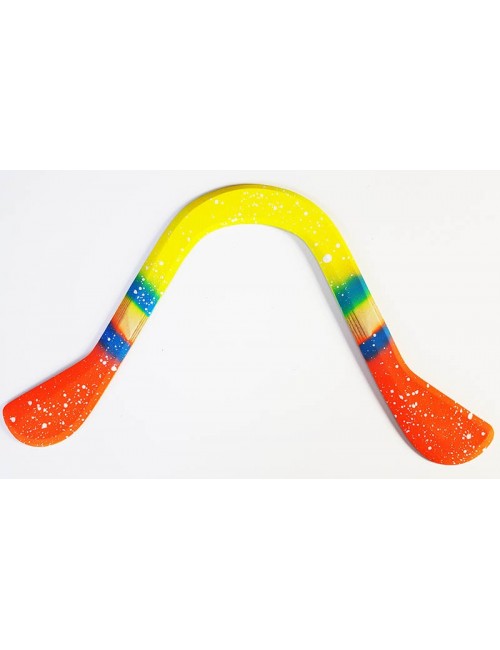 HOW IT ALL BEGAN

It started at a young age and in a very frustrating manner.
At the age of 12, in 1962, I spotted a boomerang on sale in a store for 5,99 DM. That was a lot of money for me at the time (equal to two week’s worth of allowance) but I bought it nonetheless.
I happily went to a field and spent the whole afternoon trying to throw the thing. I’d throw it 30 meters, run 30 meters, and throw it again, only to end up walking another 30 meters to retrieve it. I had unknowingly purchased a typical "Fakerang" of wood. The Finnish boomerang world champion had supposedly made it, though in reality this wasn’t true. So the boomerang went into obscurity for many years.

About 24 years later (at which point I was a happily married 36 year-old with a son), I was working at a youth center in Geesthacht as a youth worker. I was leading a workshop whose focus was to work with unemployed youth in a professionally equipped woodworking shop. One afternoon, five Turks came bursting in and in their hands was a magazine, the "GEO Australia Special." It was all about Australia and naturally contained an article about boomerangs.
The boys were all excited, talking all at once, and all I understood was something along the lines of "Hey, cool! Look, boomerangs! Let’s build some boomerangs!” I responded, "I bought something like this as a kid a long time ago. It doesn’t even work very well!” But the young guys did not give up. They showed me a picture of the boomerang they wanted to make and I proceeded to photocopy it. The picture was enlarged so we could work with a larger representation. With the magnified image, we were then able to recognize that the piece of wood had a wing profile yet the elbow was limited. This was puzzling! I realized the thing I had bought as a kid hadn’t worked because it had no airfoil, meaning it did not produce a lift and consequently could neither fly nor return.

We built the boomerang quickly and went out to the grass behind the Youth center where I threw the thing, feeling hopeful. Crap! The boomerang flew straight for about 15 meters, and then, chop! With a little twist to the right, it fell to the ground. After two more attempts, I gave up and wanted to throw the piece of wood in the garbage. Then, the little seven year-old sister of one of the Turks came up and said, "If you’re going to throw it away, can I have it? It looks so beautiful!" Sure, why not.  I gave her the boomerang. The small girl took it and then threw it. What I saw next, I couldn’t believe. The boomerang flew a beautiful circle clockwise and landed at our feet. I was completely taken aback and asked the girl to throw it again. And again it worked. At the 3rd throw I realized the crucial missing piece of the puzzle: the little girl threw left-handed! We had copied an Australian left-handed boomerang. An aboriginal boomerang! Now, it was easy. I built the thing just once, but reversed it. And a week later boomerangs were flying through the air.

Two years later, I was working in Hamburg in a self-help project for unemployed youth and young adults. My medium, the boomerang, was once again being made at the workbench. In making boomerangs, I was helping boys and girls learn how to work. But I didn’t just want it to be a game. I wanted these young people to also be able to earn money.
So I commercialized the boomerang. After all, before I had graduated and become a social worker, I had been a sales merchant. It ended up working, and our initiative became “The Boomerang Project" because it entailed youth working on a project. The project was successful due to the work of all involved, so much so that it surpassed our wildest dreams. However, the sponsoring organization decided to scale back the project to amateur level, basically turning it into an arts and crafts class for people interested in boomerangs. But I wasn’t willing to play around and, instead, along with three of the boys, founded the company "The Boomerang Project.” Initially, we made boomerangs on the weekend in the basement of my rental house. But sales grew continuously until the weekend was no longer sufficient

In two years much happened. I lost one employee after another as they found jobs in woodworking. This made me happy though, since the boys had not only learned a trade, but also found steady employment and a fixed income. On one hand, it was a blessing in disguise because my company could no longer sustain 4 employees. On the other hand, it was very difficult for me. I was forced to make a decision. I had to choose between my boomerang business or continuing as a social worker. In the end, I opted for the boomerangs and I have never regretted my choice.

Today, my wife and I run a great workshop in the basement of our house. Boomerangs have actually become my livelihood. My work has always been very important to me, so when I chose boomerangs over social work, I decided I had to meet Jörg Schlegel. Here I thought I was a boomerang lunatic, but Jörg showed me that there was still so much more! Jörg also encouraged me in becoming self-employed. During the first year, he would work weekends in our workshop, in addition to his normal job. I owe a lot to him and he became my best and most important friend. We used to get annoyed a lot back then by top throwers such as Volker Behrens but we made it a secret to learn the profile of their boomerangs. That was the birth of a new generation of construction plans, which had previously been nonexistent. Through the "boomerang world" we met Wilhelm Bretfeld who offered us friendly, paternal support. The “crazy” part of me came up with the idea to transfer the principle of the flight of maple seeds to boomerangs, especially regarding MTAs. The most important thing however is that boomerangs still give me hell of a lot of fun!